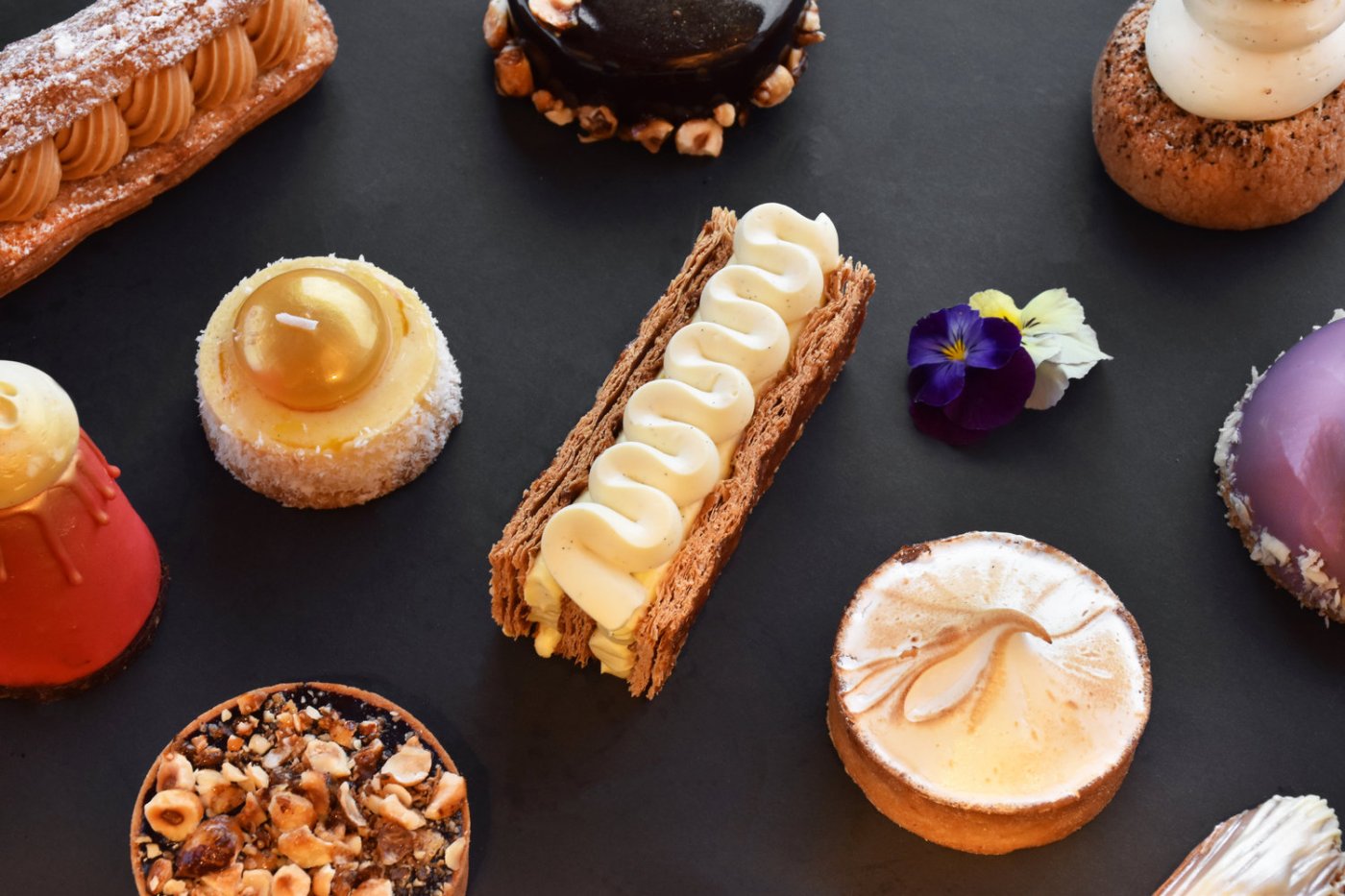 A new French patisserie has recently opened just down the road from Husband’s office. I know this because he came home from work one day and like the good wife I am I asked, “So how was your day?” and he replied “OMG A NEW FRENCH PATISSERIE HAS OPENED JUST DOWN THE ROAD AND THEY HAVE A DEAL AT THE MOMENT – SIX DOLLARS FOR A COFFEE AND A PASTRY!” and then I looked at our bank statement and thought, “How many times have you visited them today, bro – that’s half our grocery shopping budget gone already.”

So anyway, today he persuaded me to visit ‘as a little treat’. We both know the visit was mostly a treat for him because he hasn’t been at work for two days and is experiencing butter-induced withdrawals, but it’s cold and I thought it might be nice to mix up my day otherwise I’d probably spend most of it in bed because our house is so chilly (I may or may not be typing this whilst tucked up in bed at 2:28pm).

So anyway. We drive into town and across the bridge and we see the ‘tower’ which now that I’ve put quotation marks around it I realise that that’s actually how you spell it but anyway, that’s what the two-and-a-half-year-old always says when we go over the harbour bridge. In Wynyard Quarter, a flash apartment building clad in expensive-looking wood has just opened. It’s the kind of wood that a millennial couple on The Block Australia (not NZ because our version isn’t as high-roller) would look at each other with sly smiles on their faces and then back at the camera and smugly admit, “Yeah, we’ve just blown three-quarters of our entire budget on this wood specially sourced from Belgium, but it’s going to be worth it because we’re going to win” and you wish they wouldn’t because they’re so cocky but they totally do and it’s all because of that darn wood. Much of the landscape around here is still being transformed from wasteland to fancy, but you can tell that when it’s all finished this part of town is going to be where only rich people live.

Where we’re headed is on the street level of this beautiful building. Conveniently there’s a carpark right outside (“I’ve got to be careful reversing into this, babeses – I don’t want to hit the Audi,” says Husband). La Petite Fourchette (the little fork) is very nice and new and sparkly. It’s part-kitchen part-flash café. Through the windows you can see pastries being transformed from raw blobs of dough into delicious blobs of baked dough. At the counter is another window and behind it are a number of very straight lines of things I can only describe as omgdeliciousgetinmybelly. I can’t even remember what they’re all called because they were so beautiful. And glossy. So many glossy things that make me wonder what I’m putting in my tummy but really who cares because my life is better now that I’ve seen that. The only downer about the counter window is the handprints the child has left behind. I ask him what colour macaron he’d like. “Yellow!” he replies. “We’ll have a yellow macaron please, and ..” “PURPLE!” he interjects. Bro, you’re getting yellow.

Between the three of us, we order a lorainne quiche, salmon croissant, two pain au chocolats and a yellownotpurple macaron, plus a flat white, a hot chocolate (because I am a child) and a fluffy (because we have a child). All of it is delicious. We don’t talk much because it isn’t polite speaking with your mouth full. Every now and again, the child exclaims, “TREATS!” He’s pretty happy with life. He doesn’t touch his fluffy and he drops his (what look like homemade) marshmallows on the ground, but he loves eating half of my quiche and mums don’t ever get to eat anything on their own anymore.

This place sells fresh bread too – baguettes and the like. A lady who is sitting next to us stands up to leave shortly after we sit down and while I like to think it was because she had an appointment at a nail salon, I fear it’s because we have an enthusiastic two-year-old with us. Anyway, she almost leaves a brown paper bag bearing fresh bread behind and I, being the considerate human I am, point out the error of her ways. “Oh thank you,” she says. “Bon appetite!” Her Nu Zulund accent gives away the fact that she isn’t even remotely French. But relaxing in this little café that could have been on the corner of any Parisian street (I’ve never actually been to Pa-ree but that’s what the website says) does that to you.